National Trends in the Treatment of Femoral Neck Fracture

The demographics and treatment of femoral neck fracture (FNF) patients have evolved over time. Today's blog uses data from multiple sources to provide orthopaedic surgeons with insights and decision support regarding changing trends in FNF clinical practice. Our primary source is the American Joint Replacement Registry's (AJRR) 2017 presentation at the International Society of Arthroplasty Registries (ISAR) Annual Meeting*. Since the presentation, AJRR has continued to analyze new FNF Registry data and will again share findings at ISAR's 2018 meeting. Our second notable source is a published study in The Journal of Bone and Joint Surgery: "Nationwide Analysis of Femoral Neck Fractures in Elderly Patients" (Volume 99-A, Number 22, November 15, 2017)**.

Arthroplasty for proximal femoral fracture remains a commonly performed procedure with an aging but active demographic in the United States. Options for stem fixation include cemented and cementless designs, with significant variation in usage findings across a variety of databases including registries. Cementless designs are generally reported to have higher rates of intraoperative and perioperative periprosthetic fractures. FNF is a disabling and expensive condition with an estimated U.S. economic burden in the billions of dollars per year. Total hip arthroplasty (THA) for FNF continues to grow as a treatment choice, as evidenced by data trends from all U.S. data sources reported in this blog.

As a national Registry database, AJRR examined arthroplasty treatment of FNF from 2012-2016 regarding: 1) volume trends over time, 2) arthroplasty type: hemiarthroplasty vs. THA, 3) mode of femoral fixation, and 4) surgeon case volume. Throughout a three-year period (ending at the close of 2015), 14,432 hemiarthroplasties were performed for the FNF diagnosis, representing 8% of all Registry arthroplasty procedures. The results of the AJRR analysis of this data are summarized below: 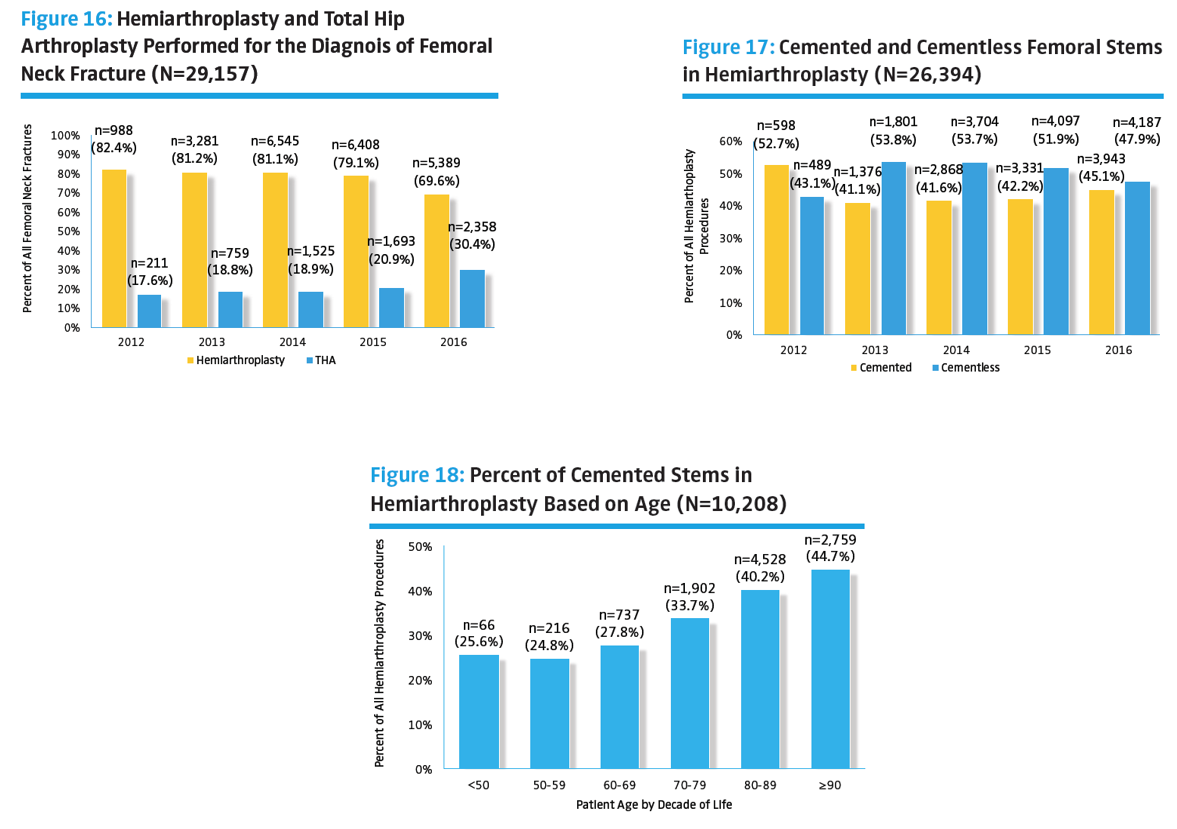 Only patients ≥65 years old were included in this study to represent the elderly population. As such, the study provides a useful complement to broader AJRR FNF findings shared earlier in this blog. The analysis focused on the most recent 2013 National Inpatient Sample (NIS) data in order to provide an up-to-date analysis of patterns and outcomes in FNF management. Selected results of the analysis are shared below:

While each of the studies highlighted in this blog have some limitations, they are already providing important indicators for FNF treatment choices. Future data and discovery factors will be better evaluated through prospective, longitudinal studies or registries like AJRR. As the Registry and other national databases grow, additional data about outcomes, revision rates, and indications will undoubtedly influence surgeon FNF treatment choices going forward.

For information about the AJRR RegistryInsights™ platform, speak with a Business Development Representative at (847) 292-0530 or Request A Demo today!

This blog was created by the American Joint Replacement Registry (AJRR), part of the American Academy of Orthopaedic Surgeons' (AAOS) registries portfolio. The blog is part of our commitment to improve orthopaedic care through the collection, analysis, and reporting of actionable hip and knee arthroplasty data. Our purpose is to communicate with others in the orthopaedic field who share the same commitment. Watch for weekly news alerts, quick tips, actionable checklists, best practices, and research findings posted to this blog. It will be information you can use each week!

The more interactive you are, the greater the value shared. Visit us at www.AJRR.net, speak with a Business Development Representative at 847-292-0530, or follow us on Twitter.

A surgical procedure for repair of an injured or diseased hip joint involving replacing the head of the femur with a prosthesis and without reconstruction of the acetabulum.

A treatment for femoral neck fractures (FNF) that utilizes a femoral head that swivels during movement. The device helps reduce the wear and tear on the new joint for longer lasting results. This prosthetic may be held in place with or without cement.

Total hip arthroplasty (THA) is the surgical replacement of the entire hip joint with an artificial prosthesis. It is a reconstructive procedure that has improved management of disease of the hip joint that did not respond to conventional medical therapy.

As a health care provider of orthopaedic services, you can access information about joining AJRR and RegistryInsights by visiting www.ajrr.net or speaking with a Business Development Representative at (847) 292-0530.

AJRR Blog posts are researched and created by AJRR staff writers: Karen Metropulos, Erik Michalesko, and Lori Boukas. If you would like to contact the writing staff, email us at AJRRinfo@aaos.org.

This blog shares health care information from a variety of independent expert sources. Some sources offer opinions that may be of interest to other professionals facing similar challenges. Our approach helps ensure diverse, well-rounded presentation of important, often complex health care content. Shared content does not necessarily represent AJRR or AAOS findings and practices.