This article first appeared in the December issue of AAOS Now, the monthly news magazine of the American Academy of Orthopaedic Surgeons (AAOS).

A study that sought to determine what factors predict total joint arthroplasty (TJA) outcomes at one year found that among patients in the American Joint Replacement Registry (AJRR) for whom patient-reported outcome measures (PROMs) had been recorded, preoperative PROMs, especially physical function subscores, predicted improvement at one year.

The study, presented as a poster at the 30th American Association of Hip and Knee Surgeons (AAHKS) Annual Meeting and available as an e-poster for meeting registrants, reviewed outcomes for 61,409 of 1.6 million patients in AJRR who had preoperative PROMs; 12,392 individuals (20 percent) in that group had linked one-year postoperative PROMs. Multivariate, logistic regression was applied to PROMs (Hip [or Knee] Disability and Osteoarthritis Outcome Score for Joint Replacement HOOS-JR [or KOOS-JR]) and demographic, clinical, and surgical information to evaluate the impact on disease-specific outcomes, minimal clinically important difference (MCID), substantial clinical benefit (SCB), and risk of revision. MCID was determined by pooling score changes, with the MCID set to half the standard deviation. SCB was based on an anchor method according to the current literature.
The investigators found that hips were more likely than knees to manifest improvement: 93 percent of the 4,287 total hip arthroplasty (THA) patients reached MCID, and 79 percent of them achieved SCB. There were 180 linked revision THA surgeries (4.2 percent). Predictors of success for THA were female sex and medium hospital size (defined as 100–399 beds). A predictor of revision surgery was teaching institution, and a predictor of low clinical impact was high preoperative physical health score on the Veterans Rand-12 or Patient-reported Outcomes Measurement Information System (PROMIS) Global. 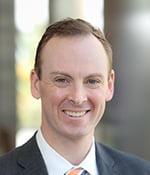 Lead study author Chancellor F. Gray, MD, FAAOS, of the University of Florida College of Medicine, said an overall revealing finding of the study was that “AJRR contains about 70,000 procedures with linked preoperative PROMs—which is a pretty remarkable number, though it still represents a large opportunity.” Summarizing the noteworthy conclusions, he said: “THAs outperform TKAs in terms of patient improvement: 93 percent of THA patients reach MCID, while about 88 percent of TKA patients do. Women are substantially more likely than men to reach clinical benefit with both procedures, and younger patients generally were more likely to see statistical improvement than older ones. Medium-sized hospitals also outperformed smaller and larger hospitals.” Among both groups, he noted, revision surgery was more likely when performed in a large hospital (defined as > 400 beds).

Dr. Gray said he and his colleagues were prompted to conduct the study because “we had been developing interest in the relationship between PROMs and surgical outcomes—both pre- and postoperative PROMs: In what way could a PROM be another valuable piece of clinical information to help guide management of patients? Could PROM data help us predict treatment failures, especially revisions? We also knew that AJRR contained incredible amounts of data on other patient and hospital characteristics and wanted to leverage the large dataset to help us better understand if there were any other patient or hospital characteristics that might help us predict lower-extremity arthroplasty outcomes.”
Fig. 1 Radiograph of knees with varus deformity in a patient prior to undergoing total knee arthroplasty 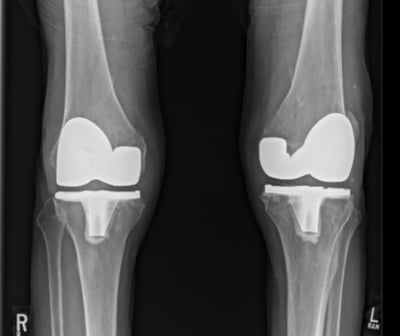 He said one finding came as a surprise: “Both female sex and younger age made such a difference in outcome across the board. Women seem to be much more likely than equivalent male counterparts to see a substantial improvement after both THA and TKA.”
Among the primary clinical takeaways: “Preoperatively, patients with higher mental health and lower physical function are more likely to experience clinical benefit with lower-extremity arthroplasty. In fact, for TKA patients, poor preoperative mental health score was actually linked to increased likelihood of early revision surgery.”

He said the study demonstrates both the value of the AJRR and the data it currently contains, as well as the greater potential of AJRR and other registries. He noted that although AJRR contains 70,000 surgeries with linked PROMs, “that still represents a huge potential opportunity for improved capture—the majority of procedures in AJRR do not contain this valuable data. As that data capture improves, similar studies in the future will be even more powerful. AJRR, in the future, will be a powerful tool to help predict individual patient risk for clinical improvement and risk for revision surgery.”

Dr. Gray he and his colleagues “also think AJRR can help risk-adjust surgical practices—for instance, surgeons whose practice primarily involved operating in a large hospital on older men should be expected to have less patients who meet MCID. That’s important if we eventually link reimbursement to PROMs.”

In terms of further areas of exploration that the study raised, Dr. Gray said, “Even with relatively small numbers, we did find linkage between certain patient factors and revision surgery. We will ultimately need a deeper understanding of that relationship—either through better capture of linked revisions over a longer time frame or continued improvement in capture of pre- and postoperative PROMs.”

Limitations of the study, he said, “reflect traditional problems with large databases: We rely on good data input by the individual contributing institutions, and, at this level, it is hard to tease out some of the subtleties that may make application of these findings more tailorable to specific patients. We also had the best data for linked revision surgeries for Medicare patients, so there may be many revisions that we failed to capture because they were performed at non-AJRR reporting hospitals or fell just outside our time window.”

Terry Stanton is the senior medical writer for AAOS Now. He can be reached at tstanton@aaos.org.
For more information about AAOS Registry Program participation, speak with an AAOS Registry Engagement Associate at (847) 292-0530 or click here.

This blog was created by the American Academy of Orthopaedic Surgeons (AAOS) Registry Program as part of our commitment to improve orthopaedic care through the collection, analysis, and reporting of actionable data. Our purpose is to communicate with others in the orthopaedic field who share the same commitment. Watch for news alerts, quick tips, actionable checklists, best practices, and research findings posted to this blog. Whether you are a participating site in one or more AAOS Registry or thinking about joining the Registry Program, this blog will provide current and ongoing Registry updates and decision support.

The more interactive you are, the greater the value shared. Visit us at www.aaos.org/registries or speak with a Registry Engagement Associate at 847-292-0530.

As a health care provider of orthopaedic services, you can access information about joining the AAOS Registry Program and RegistryInsights by visiting www.aaos.org/registries or speaking with a Registry Engagement Associate at (847) 292-0530. 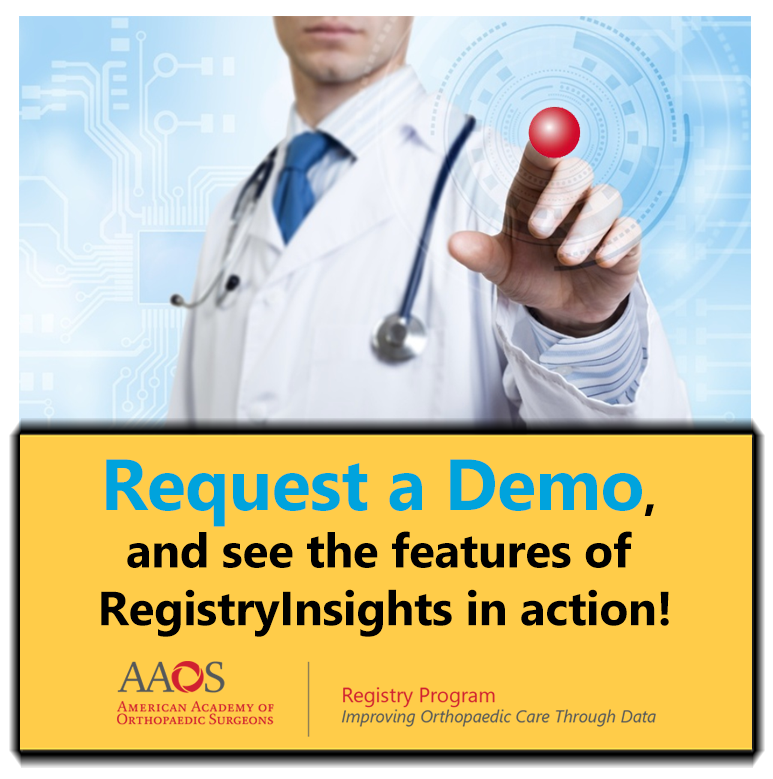 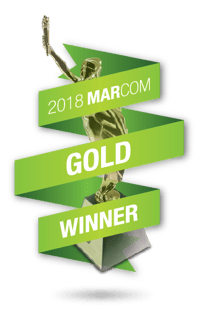