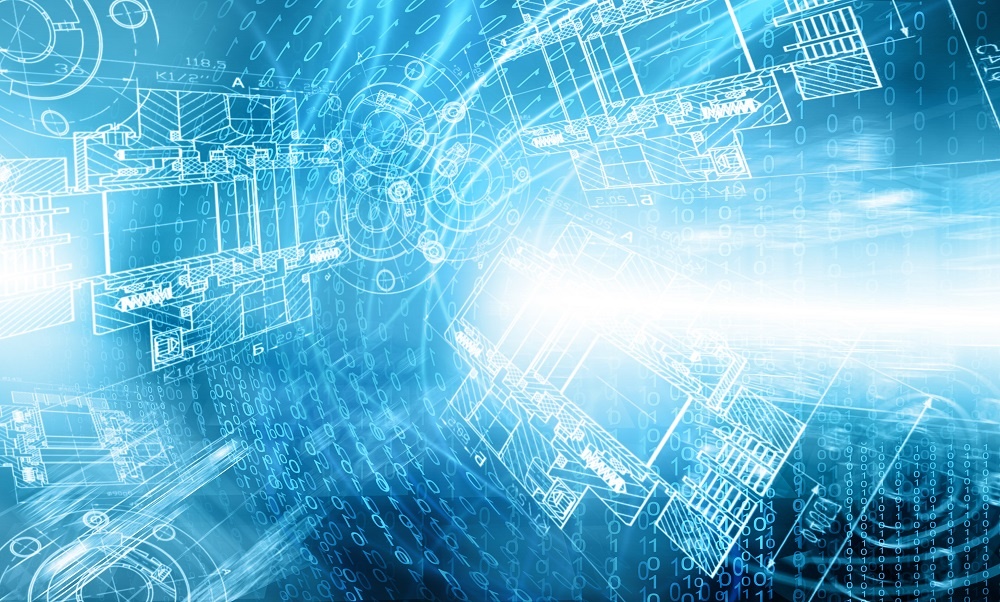 Measurement of volume metrics are important to the American Joint Replacement Registry (AJRR) because they provide indicators and insights into our data and in what areas we need to focus and improve. With over 1,000 contracted hospitals/surgery centers providing data on more than 8,000 surgeons, annually we collect more arthroplasty procedures than any other registry in the world. Over 1.3 million hip and knee arthroplasty procedures are currently housed in the AJRR database.

AJRR began the Registry because no national comparator for arthroplasty existed. Each year, AJRR makes significant and actionable progress toward becoming that premier resource. Furthermore, we take measures toward demonstrating that our data is both relevant and nationally representative through multiple statistical analysis efforts. Two of those efforts are highlighted below (one is ongoing):

When compared with the NIS database, the AJRR arthroplasty population is quite representative of that seen in the U.S. overall.

AJRR undertook a comparison of its data from 2012 – 2016 to data reported to the National (Nationwide) Inpatient Sample (NIS) between 2012 – 2014. The NIS was developed for the Healthcare Cost and Utilization Project (HCUP), includes all payers, and is the largest publicly available inpatient health care database in the United States, with information on more than seven million hospital stays each year. Since 2012, the NIS approximates a 20% stratified sample of all discharges from U.S. community hospitals that perform joint replacement procedures. AJRR’s database represents approximately 28% of all total hip arthroplasty (THA) and total knee arthroplasty (TKA) procedures performed at institutions in the United States.

This comparison indicates that the demographic profiles of the patients undergoing TKA and THA in the AJRR and NIS databases are quite similar. Specifically, sex and age distribution are nearly identical. The geographic distribution of the hospitals performing joint replacement surgery is also similar for the Midwest and Northeast regions between the two databases. However, the differences noted for the South and West likely are the result of slower recruitment of southern hospitals to AJRR, while the rapid inclusion of numerous hospitals in the California Joint Replacement Registry (CJRR) bolstered the relative percentage seen in western states. 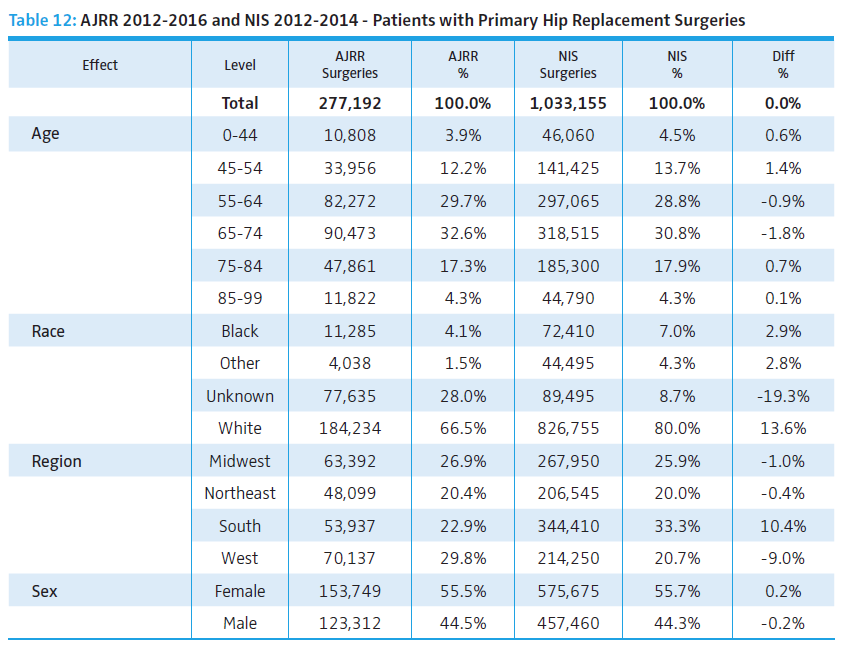 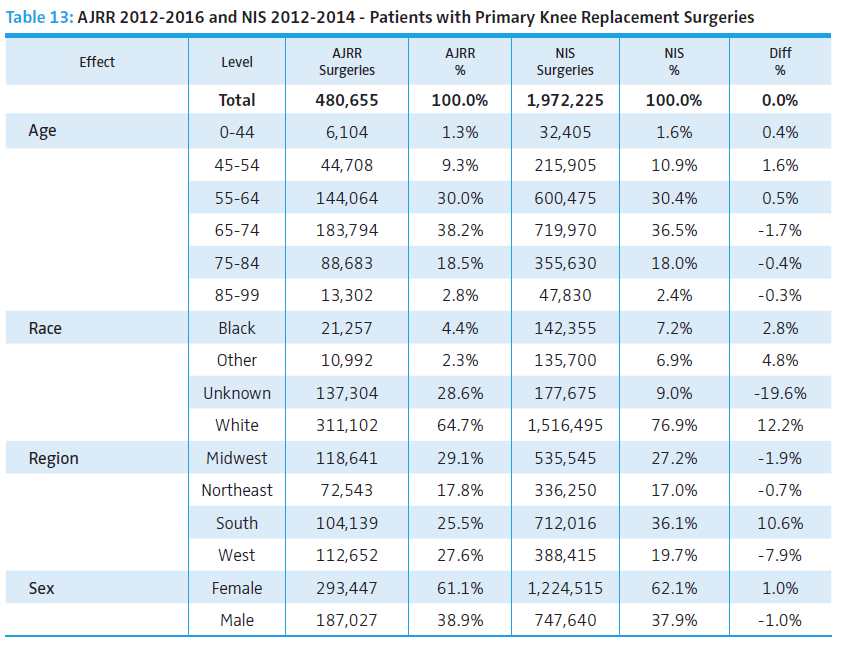 In June 2018 AJRR received, through the ResDAC process, claims data from the Centers for Medicare & Medicaid Services (CMS) which will be linked to the existing AJRR database. AJRR is the first Qualified Clinical Data Registry to access CMS claims data via the ResDAC process as provided for under Congressional legislation. AJRR applied for access to these data in the expectation that the claims would allow for assessments of data quality in the Registry, long-term patient results including reoperations that occur anywhere in the U.S., and greater insight into patient comorbidities for risk adjustment. Examining the CMS claims and proceeding with analysis has just begun, but our initial expectation is that much is to be gained in our understanding of the U.S. arthroscopy market and national representative nature of the Registry. David G. Lewallen, MD, AJRR Medical Director, said, “We hope to be able to take those 1 million patients, half of which are Medicare [patients], and do survivorship curves. If successful, this is going to take us (AJRR) to the next level (of U.S. market understanding).”

Periodic updates on the process and findings of this effort will be shared with AJRR subscribers as those results become available.

In 2018, AJRR provided updated data specifications with a finalized Post-op Complication Layout. AJRR now collects three levels of data and will report risk-adjusted longitudinal data and benchmarking accordingly. The goal of AJRR benchmarking is to incorporate Level II risk-adjusted data to enable Registry participants to accurately benchmark their outcomes and costs against the nation, a region, the participant's historical performance, and other desired reference groups.

The current data specifications with the finalized Post-op Complication Layout can be accessed in the AJRR User Group Network (Unet) Forum.

For information about the AJRR RegistryInsights™ platform, speak with a Business Development Representative at (847) 292-0530 or Request A Demo today!

The NIS was developed for the Healthcare Cost and Utilization Project (HCUP), includes all payers, and is the largest publicly available inpatient health care database in the United States, with information on more than seven million hospital stays each year.

AJRR, through ResDAC, received claims data from Centers for Medicare & Medicaid Services (CMS) in June 2018. AJRR has begun to go through the data to be able to take one million patients, half of which are Medicare [patients], and do survivorship curves by integrating with AJRR patient data.

Beginning in 2018, the goal of AJRR benchmarking is to incorporate Level II risk-adjusted data to enable Registry participants to accurately benchmark their outcomes and costs against the nation, a region, the participant's historical performance, or other desired reference groups.

As a health care provider of orthopaedic services, you can access information about joining AJRR and RegistryInsights by visiting www.aaos.org/ajrr or speaking with a Registry Engagement Associate at (847) 292-0530.

AJRR Blog posts are researched and created by AJRR staff writers: Karen Metropulos, Erik Michalesko, and Lori Boukas. If you would like to contact the writing staff, email us at AJRRinfo@aaos.org.

This blog shares health care information from a variety of independent expert sources. Some sources offer opinions that may be of interest to other professionals facing similar challenges. Our approach helps ensure diverse, well-rounded presentation of important, often complex health care content. Shared content does not necessarily represent AJRR or AAOS findings and practices.