This blog is the first in a three-part series reporting on orthopaedic studies presented at the 2019 American Academy of Orthopaedic Surgeons (AAOS) Annual Meeting and utilizing American Joint Replacement Registry (AJRR) registry data. All presentations are reported by Terry Stanton, senior science writer for AAOS Now.

Paper 145, “National Trends in Treatment of Femoral Neck Fracture” was presented by Bryan D. Springer, MD, vice chair of AJRR, on Tuesday, March 12, 2019 at the AAOS Annual Meeting in Las Vegas, Nevada. The study tracked trends in the treatment of femoral neck fractures (FNFs) based on data from the AJRR and found that although hemiarthroplasty remained the predominant mode of treatment over the five-year study period, use of total hip arthroplasty (THA) increased significantly during that time.

Use of THA decreased with patients’ advancing age, from 57.8 percent of the FNF arthroplasty procedures performed for ages 50 to 59 years to 8.7 percent for age greater than 90 years (P < 0.0001). FNF arthroplasty was the treatment of choice for individuals younger than 60 years. However, after patients reached 60 years of age, hemiarthroplasty predominated over THA. This gap grew with each increasing decade of life.

In discussing the results, the authors observed that the trend of an ongoing increase in the number of FNF cases as seen in the AJRR data over the five-year study period is likely to continue, probably owing to increased life expectancy and associated osteoporosis.

“Although hemiarthroplasty was the predominant mode of treatment, the significant increase seen in THA for all age groups may be linked to noted advantages in functional results, less persistent postoperative pain, and lower reoperation rates with THA compared to hemiarthroplasty,” the authors wrote. “In this analysis, THA was the preferred method for patients less than 60 years old. After age 60 years, hemiarthroplasty predominated. This design preference continued to grow with each increasing decade of life.”

Dr. Springer noted that this study and others deriving from data in the AJRR demonstrate the value of the AAOS-sustained registry. “Although in its infancy from a national registry standpoint, the AJRR is now the largest registry in the world by procedural volume,” he said. “Registry data give a representative sample of practices and trends across the country. In addition, as the Registry grows, we will be able to evaluate more granular data and determine best practice benchmarks.”

The authors noted two limitations to the study. First, AJRR captures data from roughly 21 percent of all institutions performing hemiarthroplasty and THA nationally. “This leaves a substantial number of procedures with a diagnosis of FNF being performed in the United States that are not currently being captured,” the authors wrote. Second, the study relies on appropriate administrative coding and reporting of procedures and diagnoses, “which can be problematic in large national database studies.”

The authors concluded, “Much remains to be considered when defining guidelines for treatment of FNF, and this retrospective analysis is limited in its ability to determine causality for the trends noted. However, AJRR registry data such as that provided here can be a benchmark of U.S. practices for reference and comparison.” 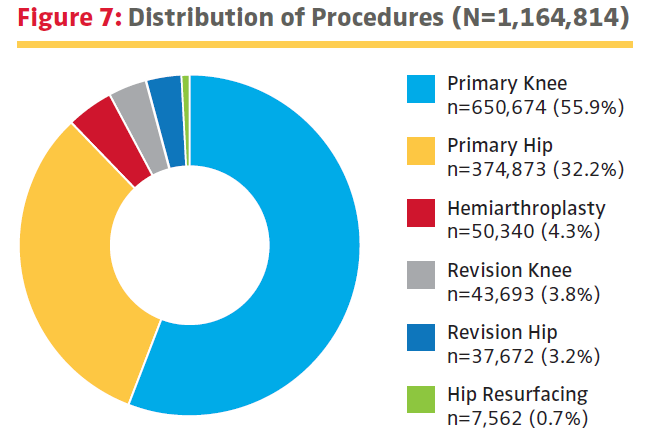